Also big cities are home for millions of people, the idea of living in (or even just visiting) a farmhouse remains legendary for small kids. As young ones start learning about animals, a farm is an ideal place to see all those creatures (farmer included!). That’s where these farm songs for kids come in to create an association with every living thing in the place.

Ranging from songs about the farm owners themselves (Old MacDonald Had a Farm, The Farmer in the Dell, A Farmer Went Trotting) to great tunes about animals (Horsey Horsey, Baa Baa Black Sheep, Chicken Dance, Five Little Ducks), this list is an amazing introduction to an environment of sounds and colors. Bingo, the farmer’s dog, is a perfect opportunity to spell b, i, n, g, o and the song sets the scene for our tour around the farm. “Five Little Ducks (Went Swimming One Day)” is a popular children’s counting song, helping kids learn to count down from five to zero and introducing the concept of subtraction to them, as each little duck swims away.

A Farmer Went Trotting (Upon His Gray Mare)

The croaking of a raven is used as the bringing of bad news in the rhyme, as a farmer and his daughter ride their mare, but can’t make it to their destination when the horse breaks her knees.

The Farmer in the Dell Originally a German song, first recorded in Germany in 1826, and probably brought to North America by immigrants. The melody is similar to that of A-Hunting We Will Go.

Karaoke Song | The Farmer in the Dell Free Printable Lyrics

Old MacDonald Had a Farm This is one of the most popular songs for kids in the English-speaking world. In Old MacDonald’s farm you can find a lot of animals and listen to their voices. Although the song’s real meaning is political and related with the medieval taxes on wool and the slave trade, kids love this as a tune literally about black fluffy sheep. Besides the animal farmers, another farmer, one that plants seeds, “sows, stamps his foot, claps his hands, and turns around to view his lands“, according to the lyrics. “Oats, Peas, Beans, and Barley Grow” is a singing game where children follow the text with moves in order to learn the seeding process.

Originally a comedy song written on 1937, this tune became a nursery rhyme as it was popular with kids. Using the “clippety-clop” sound of a horse, it’s ideal to present this beautiful animal to young toddlers. 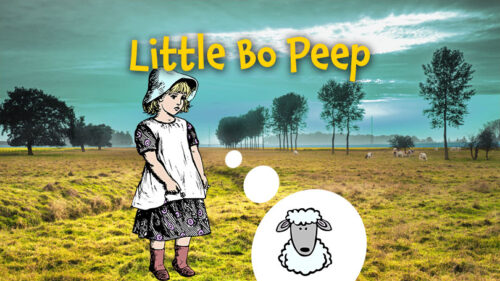 This cute little songs about a girl losing her flock of sheep only to find them again with their tails missing might be considered a bit cruel nowadays. However, it is also a coming-of-age story when Little Bo Peep takes the responsibility to offer a solution.

A Place on the Farm The lyrics to this country track by Jack Hartmann make a tour around the farm, following and listening to all the animals there. Cows, horses, roosters, and other traditional noise makers find their way into the verses, and children imitate their sounds.

A Place on the Farm Free Printable Lyrics 20 Best Christmas Party Songs to Dance to and Celebrate